Outer Space Vodka is a vodka created to surprise, to bring out that “WoW”.

To all the people who see your bottle, some will be fascinated, others will be a bit scared and others will say that it is not so bad …

What we are sure is that they will talk about it …

It is made in small lots.

The reality is that Outer Space Vodka is a very original vodka in a green bottle, in the shape of an alien, in other words an alien head, created in the USA, with 100% American grain.

The idea came from Jim Denoon, co-founder and co-owner of the product. In numerous interviews with the American media Jim usually tells that the success of for example “Crystal Head” or “Cristal Head” vodka has been his original bottle …

But with the design of Outer Space Vodka, we go one step further, because OuterSpace is based on another theme well known to modern culture …

That of the little green man from outer space, who may one day come to visit us …

They are familiar thoughts to outer space scholars, and Jim Denoon is sure the masses fondly regard aliens.

Jim is an engineer by profession and has a lot of experience in the design and development of glass containers.

He created the concept and was the creative director and in its creation from both a 3D and branding perspective.

Glass bottles are made in China.

The glass is tinted green and the eyes are made of black-carved aluminum plates that are attached to the front of the bottle to simulate eyes.

The vodka with 40º alcoholic volume, is made with corn from Iowa, is 100% gluten-free.

It is distilled five times culminating this process and is filtered through 4 billion year old meteorites from outer space.

Outer Space a vodka made in Iowa, made with 100% premium American corn (gluten-free), going through five distillations, but the peculiarity of this vodka is that it has been filtered with meteorites from outer space with an age of more than 4 billion of years.

A product with exclusive elements of space for earthlings.

Its striking green alien-shaped bottle also highlights its relationship with space and the feeling that we are drinking a product from another planet. 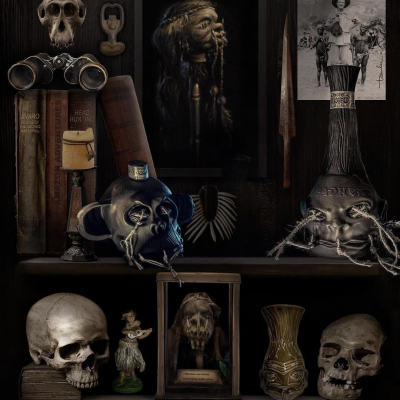